CVTE, along with a number of other industrial leaders, including Huawei, Lenovo, Midea, and TCL, made the latest list of "Top 500 Chinese Private Manufacturers of 2017" released by the All China Federation of Industry and Commerce (ACFIC). 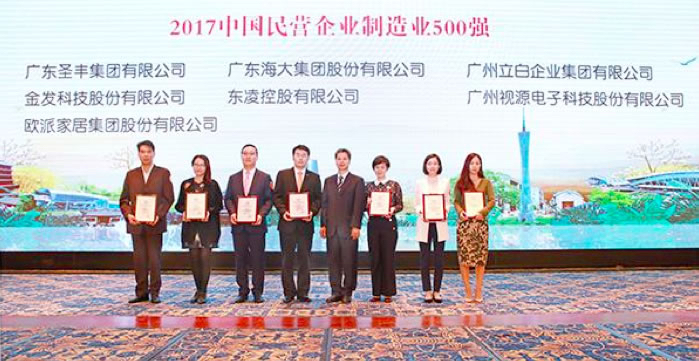 The "Top 500 Chinese Private Manufacturers" are selected by ACFIC through an extensive survey across major private enterprises. The survey is generally recognized for its exclusiveness, objectiveness, consistency, authoritativeness and public influence. With a history of 19 years, it is the most authoritative and comprehensive list in China's private business community, as well as a benchmark for private companies in terms of brand building and performance assessment.

According to reports, the threshold of this year's Top 500 Private Enterprises is significantly higher than that of the previous year. It includes a series of higher standards in terms of growth, performance, social contribution, industrial structure optimization, "go-out" initiatives and export sales. Bottom line sales of Top 500 Private Enterprises exceeded RMB10 billion in 2015, and increased by RMB 1.877 billion from RMB 12.052 billion in 2016. For the Top 500 Private Manufacturers, the bottom line increased by as much as RMB 835 million to RMB 5.355 billion.

As one of the most authoritative and influential lists in the private business community, the "Top 500 Chinese Private Manufacturers of 2017" is the best award for CVTE's achievements amid the country's economic reform. An important milestone along CVTE's brand building journey, it is sure to provide increasingly valuable stimulation and encouragement in the years to come.

CVTE tries to control both ends of the "profit smile curve" by focusing on R&D and innovation. Many of its products are being extensively used in consumer and business electronics systems--ranging from smart education to smart healthcare, smart homes, in-vehicle solutions, disruptive business conference solutions, robotics, software and hardware…These are just a few sectors that CVTE is infiltrating into.

In recent years, the company has attracted more and more attention along with the expansion of its B2B businesses, including its interactive smart tablets for the education sector and its business service solutions. Its vigor in the business service market grows increasingly powerful as a number of innovative product lines have come onto the market.

With such an influence, we are confident that CVTE will be able to reap more awards and achievements through continued innovation and development. It will create more value by applying cutting-edge technologies to a number of sectors, including home, travel, education, healthcare and business services.